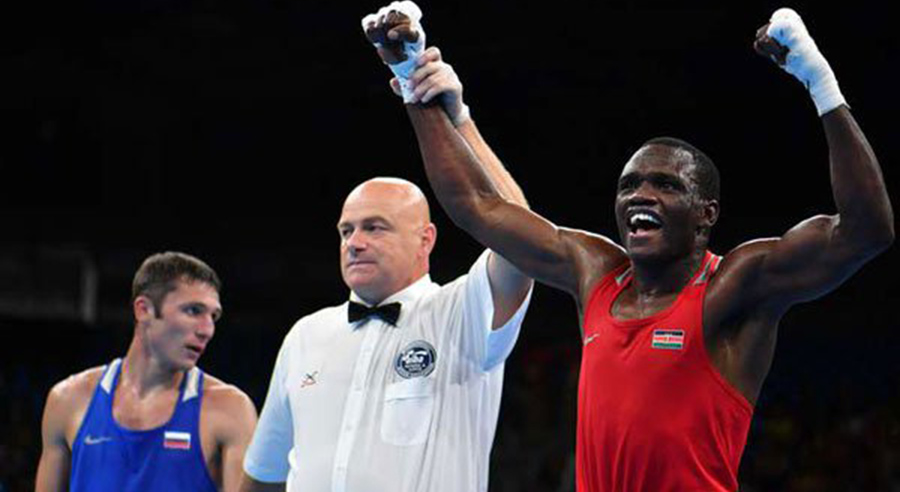 Kenya's Rayton Nduku Okwiri produced the biggest shock of the boxing so far at the Rio Games on Sunday when he defeated Russia's welterweight London bronze medallist on a split decision.

The 9,000-seat arena gave the Russian boxers and a smattering of their fans a few half-hearted boos, after all 11 of the country's fighters were cleared to compete in Rio despite revelations of rampant state-run doping across Russian sports.

Okwiri was the underdog against Andrei Zamkovoi, who won bronze four years ago, in their welterweight clash.

But he made a nonsense of that and quickly endeared himself to the largely Brazilian crowd, who booed when the few Russian supporters chanted and shouted "Kenya! Kenya!" as the 30-year-old Okwiri kept pursuing his foe.
After overcoming his first opponent in a round 32 bout on Sunday evening, Rayton Okwiri is already dreaming of becoming only the second boxer to win a gold medal for Kenya at the Olympic Games.

Two of the three ringside judges scored in favour of Okwiri against Russian opponent, Andrei Zamkovoi in the fight staged at Riocentro Pavilion 6.

However, Okwiri said the level of competition is tough and he will not underrate his next opponent.

Okwiri’s next opponent will be Mohammed Rabii of Morocco who got a bye into the round of 16.