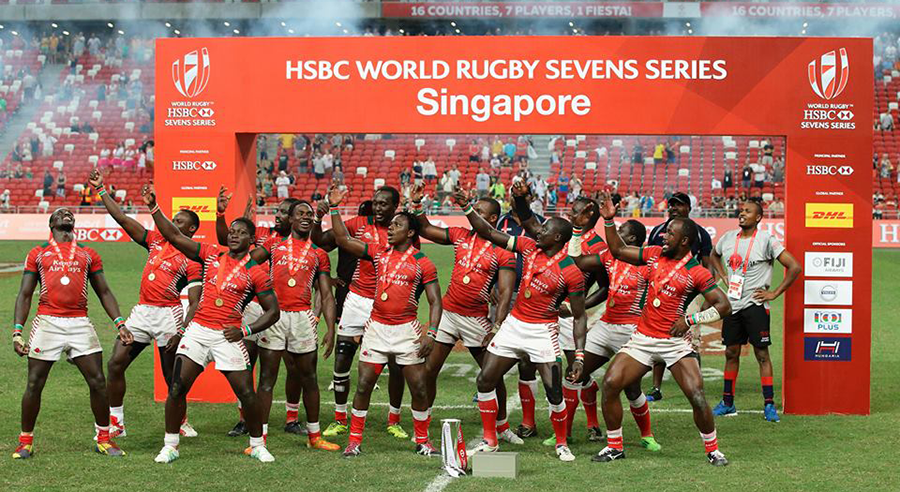 Kenya made history by squishing defending champions and series leaders Fiji 30-7 to claim the Singapore Sevens Main Cup title, on Sunday.
This is Kenya's first ever Cup title in the World Sevens Series. The famous victory over Fiji saw Shujaa leapfrog England into the seventh place on the overall IRB Series rankings after garnering 12 points from the eighth leg to take their point tally to 85. South Africa finished third after beating Argentina 28-0 as Samoa stunned New Zealand 26-21 to lift the Plate. On their way to the final, Kenya stunned Argentina 15-12 as Fiji thrashed South Africa 28-0. Nelson Oyoo put Kenya ahead with an unconverted try before Injera struck two tries to go within two tries of Argentina's Santiago Gomez Cora at the top of the all-time try scoring charts with a try double to earn the player of the final award. Sammy Oliech then scored the third try to hand Kenya a comfortable 20-0 halftime lead. Jerry Tuwai pulled a try back for Fiji that was converted by Vatemo Ravouvou, but Oyoo raced from his own half to put the game beyond Fiji with a brilliant unconverted try. Substitute Frank Wanyama sealed the famous victory with a try in the corner.