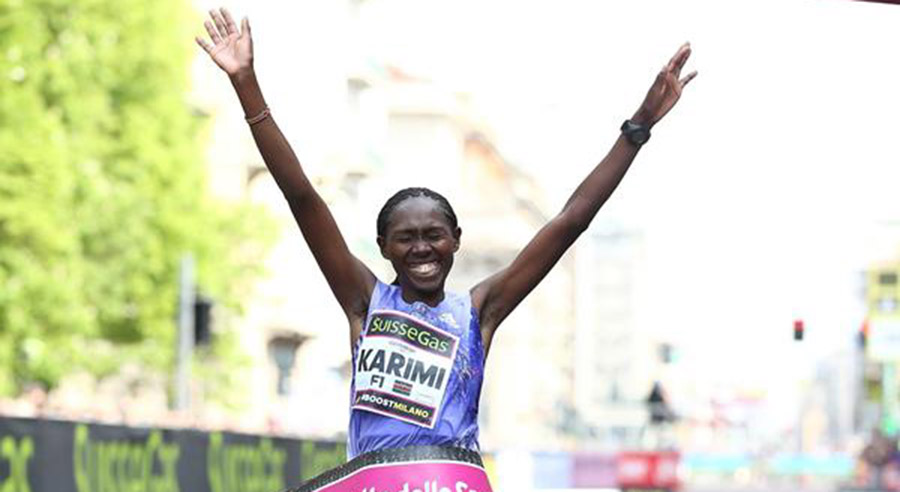 For the fifth time in 22 editons of the event, Lawrence Cherono and Lucy Karimi made it a double for Kenya at the Volkswagen Prague Marathon, an IAAF Gold Label Road Race, on Sunday morning (8).

Cherono made a powerful late-race surge to win the men’s race in 2:07:24, taking over two minutes off his previous best, while compatriot Lucy Karimi did likewise to take the women’s title in 2:24:46.

With the sun rising high in the sky by the time the event got under way – and temperatures steadily climbing to 19 degrees Celsius throughout the morning – the pace was kept to a steady tempo over the opening half of both races.

At halfway, passed in 1:03:06, Ethiopia’s Seboka Dibaba was the only non-Kenyan among the leading pack, which was reduced to eight by the time the leaders reached 30km in 1:30:18.

At that point, it was clear the course record of 2:05:39, set by Eliud Kiptanui in 2010, was out of reach but, nonetheless, the leaders began to slowly crank down through the gears.

The athlete most keen to push things along was Kenya’s Felix Kandie, who whittled the leading pack down to three as he passed 35km in 1:45:28. Running alongside him were compatriots Lawrence Cherono and Solomon Yego, with Yego in particular doing more than his fair share of pacing duties at the front.

However just past the 37km mark, Yego found the pace too hot to handle and lost contact with the leading duo. At that point, Kandie continued to apply pressure up front, but Cherono seemed comfortable on his shoulder.

Shortly after the 38km mark, Cherono surged to the front and created an advantage, one which he would extend all the way to the finish.

Cherono raised his arms aloft as he crossed the line in the Old Town Square in 2:07:24, over two minutes faster than his previous best of 2:09:39, which he ran to win the Zurich Marathon last year.

“I felt very tired at the end because the course was tough, not very flat, so it tired me out," said Cherono. "I was having a little panic because sometimes you can go alone until the last minute and someone could come and pass you. I had to worry. I'm very happy because I am the champion."

Winning the Czech national marathon crown for the second time since 2014 was Petr Pechek in 2:22:14, who was 14th overall.