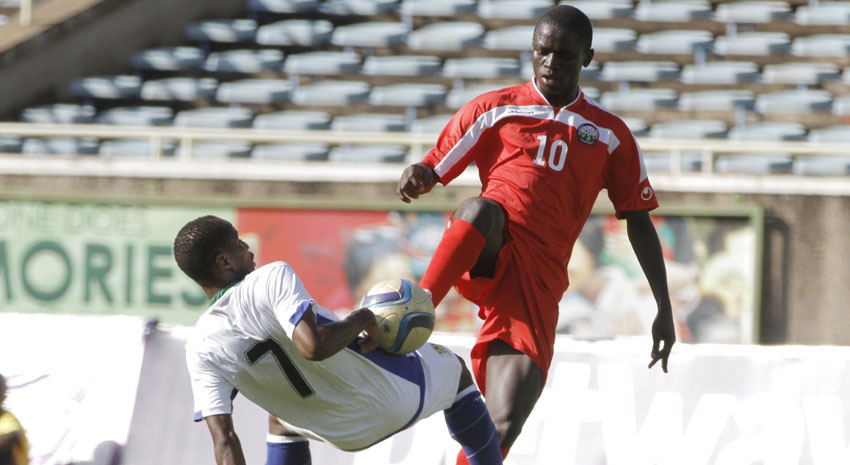 Southampton midfielder Victor Wanyama came to the rescue as Kenya’s Harambee Stars drew 1-1 with visiting Taifa Stars of Tanzania in international friendly match, at the Kasarani Stadium on Sunday.
The Harambee Stars’ captain converted from the spot as both sides shared the spoils. The teams were using the match as part of their preparations ahead of this weekend’s 2017 Africa Cup of Nations qualifiers. “We have seen our mistakes and will need to correct them ahead of our next match against Sudan,” said Wanyama, who took delight in scoring his third international goal. Tanzania started the brighter side, dominating possession, but their dominance began to fade away when Harambee Stars slowly settled into the game. Tanzania threatened in the fourth minute with captain Mwinyi Kazimoto forcing a fine save from Kenyan goalkeeper Bonface Oluoch.
Eight minutes later, the visitors had another scoring opportunity when Shiza Ramadhan broke into the right flank after receiving a brilliant pass, but his effort went begging. Kenya then earned their first corner kick in the 16th minute, but nothing fruitful came out of it as Eric Johanna was caught in an offside position.
Kenya could have broken the deadlock in the 21st minute, but Tanzania’s shot-stopper Deo Munishi came off his line to deny him the scoring chance. Two minutes later, an impressive Timbe was fouled on the right wing by Hussein Mohammed, but David Owino’s header from Aboud Omar’s free-kick wasn’t the best of them. And after a series of attempts, Tanzania finally drew the first blood in the 34th minute, when Elias Maguli soared above his markers to head home Shiza’s cross from the right. But the visitors celebrations were short lived as Wanyama levelled from the spot in the 39th minute after right back Juma Abdul tripped Timbe in the box. Kenya will face Sudan tomorrow at Kasarani.