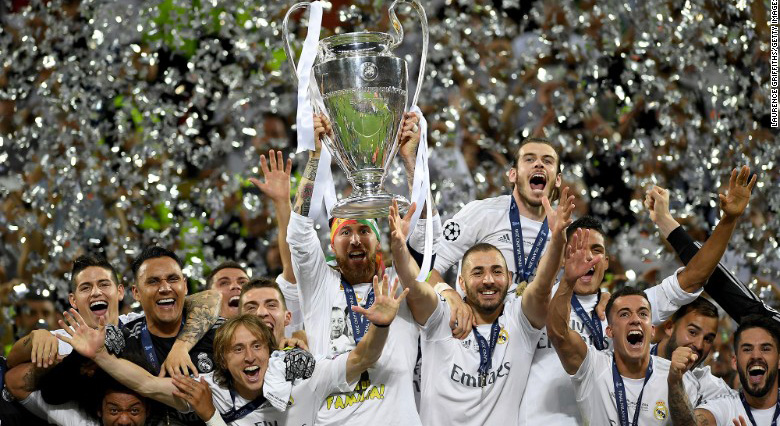 Cristiano Ronaldo fired home the winning penalty as Real Madrid won Europe's biggest prize for the 11th time in its history.
Ronaldo held his nerve to beat Jan Oblak from the spot after Real had been held to a 1-1 draw by Atletico Madrid in the Champions League final.
Juanfran, the Atletico defender, was the unfortunate man to miss his spot kick -- striking the post and allowing Ronaldo to fire his team to glory.
It was a dramatic conclusion to a game which only caught light in the later stages.
Sergio Ramos had headed Real in front after 15 minutes before Atletico hit back after the break.

Antoine Griezmann, scorer of 32 goals this season, should have equalized just after the interval but the forward struck the crossbar from the penalty spot after Fernando Torres had been fouled.
That miss failed to dishearten Atletico though and Yannick Carrasco, a second-half substitute, fired home from close range with 11 minutes remaining to level the tie.
The contest moved to penalties and with Real leading 4-3, Juanfran became the first man to fail by hitting the post.
That enabled Ronaldo to step forward and the Real man made no mistake -- coolly firing home to win the club's second title in three seasons.
It also ensured Zinedine Zidane, the Real coach who took over in January, has now won the trophy as both a manager and a player with the club.