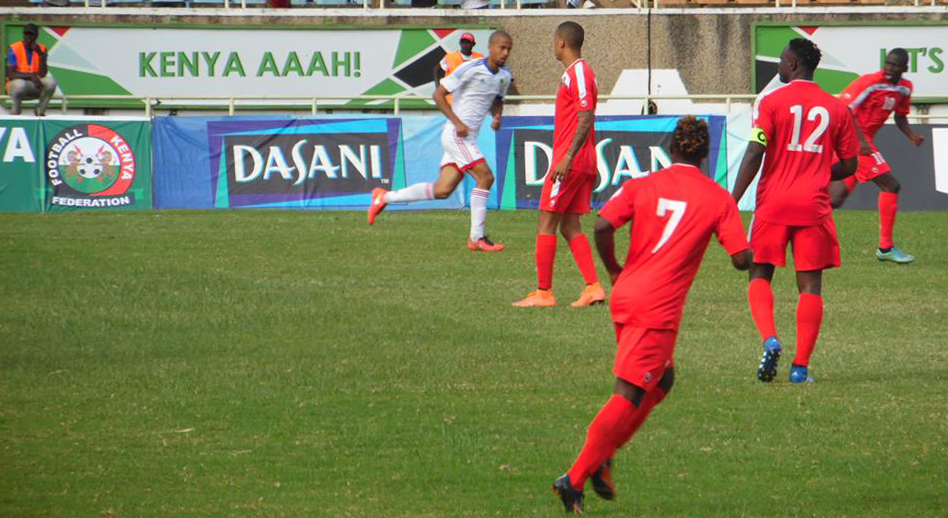 Harambee Stars bagged their first win in Africa Cup of Nations 2017 Group E on Sunday after edging out Congo 2-1 in a lively encounter at the Kasarani Stadium in Nairobi.

Ayub Timbe and Eric Johanna scored the crucial goals in each half respectively to hand Coach Stanley Okumbi his maiden win as the national team coach.

Despite being a dead rubber match after Stars smoked out any hopes of making it for the biennial parade of Africa’s best footballing nations in Gabon in 2017, Coach Okumbi was out to bag a win and his line-up for the day gave the ever optimistic Kenyan fans something to hope for.

Harambee Stars started well but found themselves behind in the 19th minute after a foul by debutant Ismail Gonzalez inside the box led to a penalty that Prince Oniangue calmly converted to give Congo a 1-0 lead.

A thunderbolt shot by Belgium based Ayub Timbe evened out the score line in the 23rd minute.The industrious Timbe had another close shave in the 35th minute after a great pass from Johanna but the Congo keeper made a timely intervention for a corner.

Kenya came back from the breather with one mission, to score another goal a push for a win. The good build-ups however were chocked by the Congo defense.

In the 54th minute, Coach Okumbi tweaked his tactics by resting in Gonzalez and introducing in the tall Anthony.

The winning goal came in the 67th minute after Eric Johanna coolly lopped the ball past the Congo keeper in a counter attack engineered by captain Victor Wanyama through a long cross forward.

Despite late pressure by Congo, Harambee Stars held on to bag the deserved victory that will serve great to reassure the fans the future is not bleak despite early elimination from the tournament.

The result worked in favor of surprise group leaders Guinea Bissau who have now qualified for the 2017 tournament.

Despite the win, Kenya is still bottom of the group on 4 points. Their last group match is against Zambia on September.