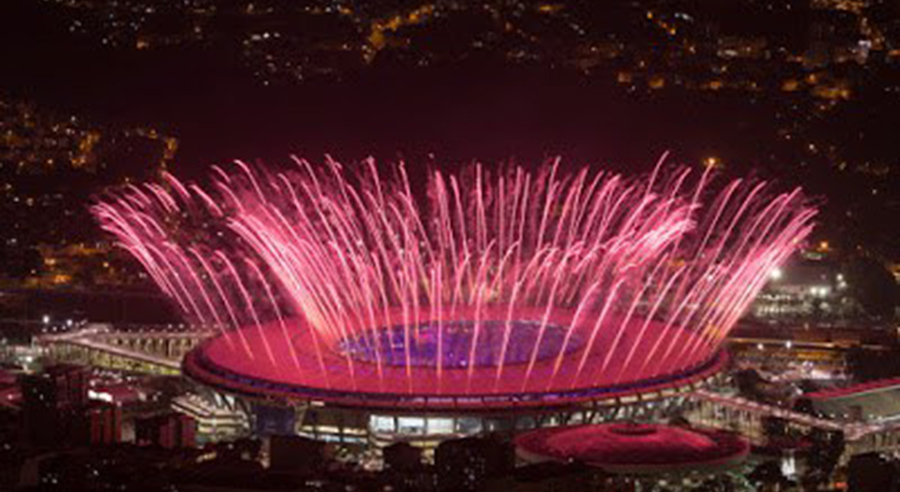 The Rio Olympics officially started with a long and loud celebration of Brazilian culture that also featured some unfortunate reminders of the troubled backdrop to these Games.

The dominant images from the four-hour opening ceremony at the Maracana Stadium will be supermodel Gisele Bundchen's catwalk across the pitch to The Girl From Ipanema, the joyous arrival of Brazil's team and former marathon star Vanderlei de Lima lighting an Olympic cauldron that morphed into a golden disco ball.

But the boos that greeted acting Brazilian president Michel Temer's short address to open the Games, the smattering of jeers the Russian team received and the catcalls that followed a reference to government funding tell a different story.

Rio 2016 has had a difficult upbringing, with worries about the country's ability to afford it, Rio's preparations and sport's credibility in the face of a divisive doping crisis, but South America's first ever Olympics is now ready to entertain the world and perhaps revive a nation.

Temer, who took office in May when impeachment procedures were started against president Dilma Rousseff, tried to postpone his poor reception by opting out of the initial welcome alongside International Olympic Committee president Thomas Bach.

This meant the first boos of the evening went to the team from Brazil's traditional rival, Argentina, although they were of the pantomime variety and the selfie-snapping Argentinians did not seem fazed.

But by that point the Maracana was in full-on party mode as a succession of dancers, musicians and volunteers raced through routines intended to showcase Brazil's diversity and history, even finding time for a lecture on environmental issues.

Bundchen's long sashay was an early highlight, as was a clever section that featured a biplane appearing to fly out of the stadium and circle the city's signature Christ the Redeemer statue.

The ceremony's creative director Fernando Meirelles had less money to spend than his predecessors, including Danny Boyle, the mastermind of London 2012's memorable show, but he promised "the coolest party" and gave it a good go.

The Parade of Nations is always the Games' first big test of stamina, and with new countries such as Kosovo and South Sudan taking their place in the pageant for the first time, as well as a team of refugee athletes, Rio's race through the atlas was even more gruelling than usual.