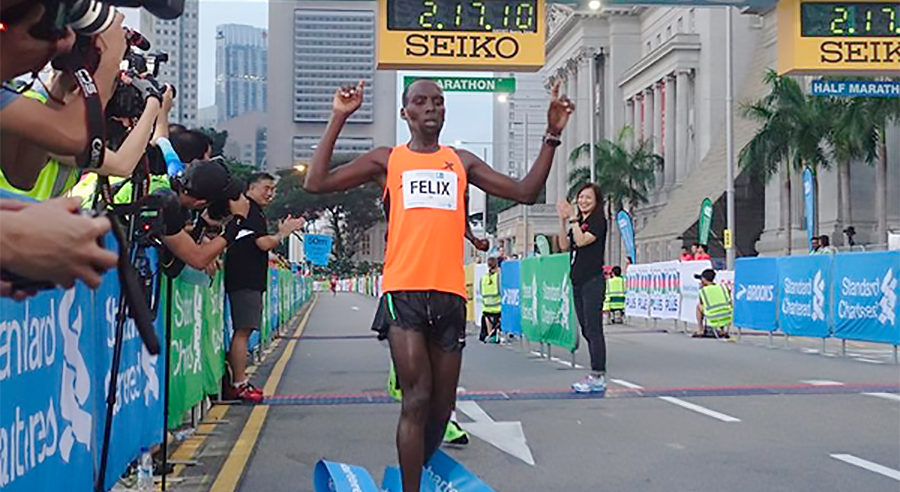 In what was expected to be a battle among experienced marathon runners, Kirwa waited until the closing stages to make his move and pull off a surprise victory.

Fifteen men – including Kirwa, two-time Singapore champion Kenneth Mungara, 2012 Singapore winner Kennedy Lilan – were still in contention as half way was reached in 1:09:24, making it clear that the course record of 2:11:25 would survive another year.

During the course of the following 10 kilometres, with 30km being passed in 1:39:00, the lead group had been whittled down to 10. The field continued to gradually reduce as the pace started to pick up during the closing stages.

Lilan was among the three men to drift off the pack before the 35km mark, leaving Kirwa, Mungara, Paul Kangogo, David Kipkorir, Robert Kiplimo and Luka Chelimo out in front. With just a few kilometres remaining, only Kangogo, Kirwa and Kipkorir remained in the lead pack and it became apparent that the race would go down to the wire.

Kirwa, brother of Olympic marathon silver medallist Eunice Kirwa, proved to have the strongest finish as he sprinted away from Kangogo to cross the line in 2:17:17, three seconds ahead of his compatriot. Kipkorir finished third in 2:17:32 while Mungara was fourth, a further minute behind the leading trio.