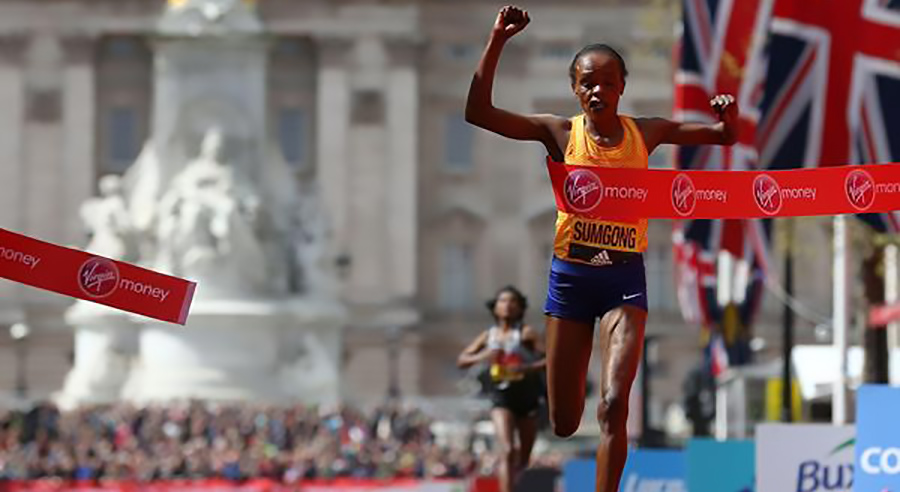 Sumgong defied the odds last April when she recovered from a bruising fall to beat some of the world’s best in the British capital with a devastating finish. The 32-year-old went on to make history at the Rio 2016 Olympic Games when she became the first Kenyan woman to win the Olympic title in the marathon. Sumgong defeated Ethiopia’s world champion Mare Dibaba in Brazil to confirm her status as the world’s top marathon runner of 2016.

Dibaba, who won bronze in Rio behind Bahrain’s Eunice Kirwa, will be one of Sumgong’s main rivals in London from a field that includes four women who have broken the 2:20 barrier and no fewer than nine who have run quicker than 2:22.

"London is the marathon every runner wants to win," said Sumgong. "I can’t wait to return to defend my title."

The quickest on paper is again Mary Keitany who will be aiming to become only the fourth woman to win the London Marathon three times after completing a hat-trick of New York City Marathon titles last November.

Keitany became the second fastest women marathon runner of all time when she won her second London Marathon in 2012 in 2:18:37. But after finishing runner-up in 2015, the African record holder could only place ninth last April after she was involved in the collision that brought down Sumgong. That cost Keitany a place on Kenya’s Rio team and the 35-year-old will feel she has something to prove.

"I love running in London," said Keitany. "After the sickness I had before the race and the fall last year during the race, I want to show everyone what I can do. My goal is to win the London Marathon for the third time and to demonstrate to everybody that I could have won the Olympic Games last year if I had been selected."

The domestic competition for Kenyan runners will be fierce as the elite line-up also includes Florence Kiplagat, the 2016 Chicago champion and half marathon world record holder who was third here last year and second in 2014; last year’s Tokyo Marathon champion and 2015 world silver medallist Helah Kiprop; plus the Olympic 5000m champion Vivian Cheruiyot who will make her marathon debut at the age of 33.