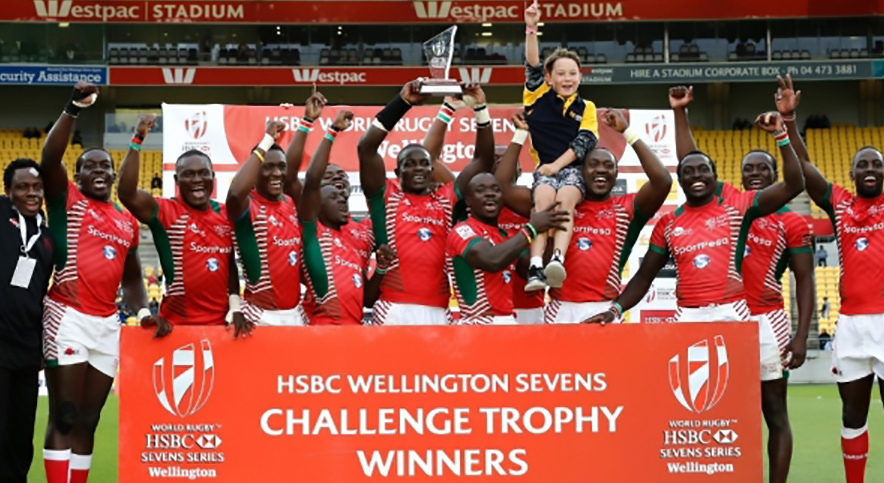 Kenya lifted the challenge trophy title, collecting eight points to stay tenth on the log as the third round of the 2016/17 HSBC Sevens World Series, the Wellington Sevens, came to a close on Sunday.

Shujaa were 19-17 winners in the challenge trophy final.

Kenya raced into a 14-0 lead through tries from Sammy Oliech and Collins Injera, Eden Agero sure with the conversions but the Aussies clawed back through Henry Hutchinson’s converted try.

Eden Agero converted Billy Odhiambo’s second half brace to give Kenya a 19-7 lead before Madison Hughes struck late for the USA, too little to late as Kenya advanced to the challenge trophy final.

Sammy Oliech scored and converted his own try for a 7-0 lead, Billy Odhiambo and Willy Ambaka touching down as Kenya took a 17-0 lead into the breather.

Bondarev would score for Russia but Dan Sikuta’s converted try gave Kenya the cushion and the result.

KENYA IN POOL A FOR SYDNEY SEVENS

Kenya has been drawn with South Africa, England and Japan in Pool A for next weekend’s fourth round of the 2016/17 HSBC Sevens World Series in Sydney, Australia.