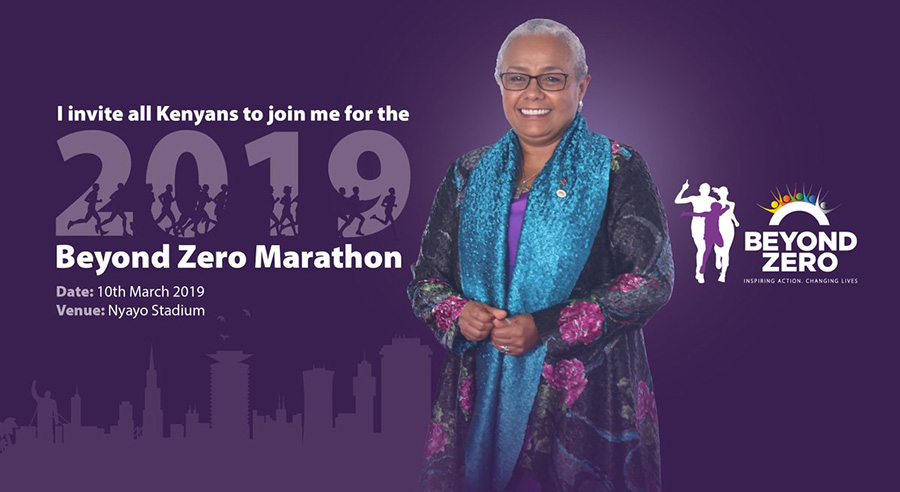 The First Lady Margaret Kenyatta, who is the organiser of the noble race, simultaneously flagged off the 21Km Paralympic Race of the 4th edition of the Beyond Zero Half Marathon. The race, which started and ended at the Nyayo National Stadium, was clustered into different categories, including the 21km half marathon, the 10 km road race, the 5km family race, wheelchair and tricycle races and a special 2km 'pregna' walk for expectant mothers.

Other prominent figures who came to support the First Lady's marathon include the incoming Sports Cabinet Secretary Amina Mohamed and Ethiopia's former First Lady Roman Tesfaye. The First Lady, Margaret, had been training for the race for weeks at State House where she was joined by a number of journalists from various media houses.

This year's edition comes at a time when the country's health sector is faced with a myriad of challenges, among them perennial shortage of facilities which has resulted in endless strikes by medics and increased mortality rate. For instance, in Kiambu county alone, 60 infant deaths were recorded between December 2018 and February 2019 at the Kiambu Level Five Hospital. The Beyond Zero Campaign is an initiative by the First Lady aimed at improving the quality of health services of mothers and children across the country.